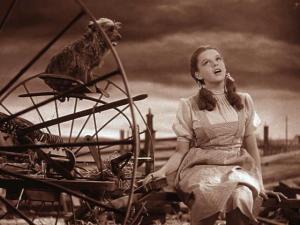 “Audiences know what to expect, and that is all they are prepared to believe in.”-Tom Stoppard, Rosencrantz and Gildenstern are Dead

Back in November, I had a conversation with an agent about a novel I am looking to publish. He had strong opinions about what types of books are marketable, as all agents do. His point of view was that for a story to sell it had to conform to certain reader expectations. There was, he argued, a natural ending for stories and the natural ending was exactly the one you would expect. In the Hollywood movie, the hero saves the world and wins the respect of his estranged girlfriend in the process, for example. If the film does not deliver the expected resolution then audiences will not be satisfied. Call it the “Rosencrantz Theory of Literature.”

Of course, what is considered a “natural ending” changes over time and across cultures. The satisfying end for the Victorians was one in which the protagonist was destroyed by cruel society. We prefer the “happy end.”

The “happy end” differs depending on whether the protagonist is male or female. Here are the two “natural ends” for popular narratives: In the male happy end the narrative is complete when the hero has scored a victory against great odds. In the female narrative the “natural ending” comes when she is content with the life she has (with bonus points if she finishes the story in true love).

Dorthy has all kinds of adventures in Oz, but the message she comes away with is “there’s no place like home.” Her victory is not becoming the leader of Emerald City, it is being content to live in black and white Kansas. She has a happy end when she stops dreaming of a better life “somewhere over the rainbow.” Put another way, victory for Dorothy is giving up on her dreams.

This is not a narrative that died in the 1940s. It was not pushed aside by women’s lib in the 1970s. In fact, I came to the realization that the expectation of a “natural ending” was different for women while watching “The Devil Wears Prada” the other night on a hotel TV.

In Prada, the protagonist is a young woman who scores what is considered to be a dream job as the assistant to the editor of a major fashion magazine. Her boss is demanding and ruthless. The young woman moves up the ranks and ends up on a glamorous trip to Paris Fashion Week rubbing elbows with high society. Her boss, incidentally, is pictured as having a rocky home life as is expected. Powerful female business women are expected to achieve status at the expense of real relationships. Our protagonist does not want to make the same mistake. In the end (spoiler alert) she walks away from the shallow and artificial life of status and glamor to return to a more “authentic” existence. We see her stepping out of a taxi and abandoning her boss as the boss looks on with disguised admiration for the young woman. The film ends with the main character walking in comfortable clothes with her head held high.

It also struck me that it was an inversion of the expected male ending. The male protagonist’s story would tend to resolve with the man victorious in the career field he had entered. There was a point in the movie where the main character becomes aware of a plot that could oust the editor. She tries to protect the boss who has made her life so difficult. I would expect the male character to use this opportunity to forward his own interests and bring down the bad guy. It might end with him as the editor of the publication himself. It is not common for the male narrative to end not with worldly success but with the character deciding he does not want to play the game.

In “The Devil Wears Prada,” the main character is dumped by her boyfriend because her demanding job does not allow her to devote enough attention to him. As an audience we are expected to take his side and to agree that she is going the wrong direction.

This same type of conflict is quite common in films with male protagonists. A man becomes obsessed with a mission of some kind– winning a legal case, catching a killer, saving the world from aliens– what have you. At some point he argues with his wife who feels he is shirking his family responsibilities. In this case, however, the audience is expected to understand that his mission is vitally important. We do not want him to decide that catching the killer isn’t that important after all in the greater scheme of things and that he should walk away to focus on his authentic emotional life. What generally happens, instead, is that against all odds, with no one backing him, the hero completes his mission winning the admiration of his wife in the process.

Prada is not an isolated example of the “female happy end” where the woman shuns worldly status. One of the most popular films of all times is “Titanic” in which bold and feisty Rose realizes that her upper class life is empty after she meets working class Jack Dawson on deck. She walks away from a life of riches and even throws a priceless gem into the sea.

The female protagonist has a happy end not when she has status in the world, but when she transcends the desire for status.

Dorothy has a happy end when she gives up on her dreams.