“Compassion..gives the person who feels it pleasure even in the very act of ministering to and succouring pain.”-J..B. Mozley, Sermon at Oxford University, 1876 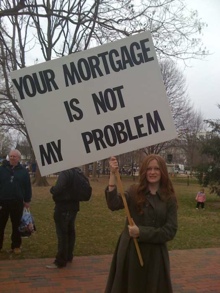 Since writing yesterday’s post, I have been unable to shake a sort of existential sadness at the condition of, for want of a more secular word, the American soul. There is just something about Mick Mulvaney’s attempt to redefine “compassion” as not supporting Meals on Wheels that has played on my mind.

The word “compassion” comes from Latin roots com meaning together and pati to suffer. Compassion is to “suffer with” someone. It has been part of our lexicon since English looked like this: “Huanne on leme is zik oþer y-wonded. hou moche zorȝe heþ þe herte and grat compassion y-uelþ.” It has always conveyed a sense of fellow-feeling for someone who suffered and a desire to do something to alleviate that suffering. As the Oxford English Dictionary puts it: “The feeling or emotion, when a person is moved by the suffering or distress of another, and by the desire to relieve it; pity that inclines one to spare or to succour.”

Compassion is recognizing that a home-bound senior suffers and finding a way to alleviate some of that suffering, by delivering meals. What does it mean then when the perspective is shifted so that the home-bound senior is essentially accused of not being compassionate to the person who is asked to help?

Mulvaney likes to use the rhetorical device of casting the tax payer as a West Virginia Coal miner or “a single mother from Detroit” when the real beneficiaries of the budget he is promoting would seem to be the wealthy, military contractors and border wall builders. (Salon has a good analysis of who the budget is designed to benefit. It sure ain’t single mothers in Detroit.) And by the way, as someone who grew up and lived most of her life in suburban Detroit, I’m getting tired of my region being caricatured in the popular press as an island of urban poverty surrounded by a sea of “rust belt” working class Trump voters.

One of the most enduring images for me of the financial crisis of 2008 was an attractive, young woman with a satisfied smile on her face, holding a large sign that read “Your mortgage is not my problem.” The sign makes a virtue of non-compassion. It states a flat refusal to suffer with. “Your pain does not touch me,” it says, “I will not be moved by it.”

There is some element of our culture, an element that is now ascendant, that fears that in trying to relieve suffering, someone undeserving might get some of the aid. Some of us would rather let everyone starve than risk feeding someone who could get food for himself.

The question at the heart of all of this is what do we owe one another as fellow citizens, as neighbors, as fellow human beings?

It especially confuses me when the virtue of non-compassion is preached by someone calling himself a “Christian.” (Mulvaney is Roman Catholic.) The earliest Christian writings we have are Paul’s epistles. Scholars generally think that Thessalonians and Galatians were the first two books of the New Testament when arranged in chronological order. In Galatians, Paul recounts the details of a theological dispute he had with James who was the central figure in the early Jesus movement. The Galatians did not know whether they were to listen to James’ representatives or to Paul. They differed on the question of whether a gentile Christ-follower had to be circumcised in order to be a full member. James thought they did, Paul did not. In the end, they came to something of an agreement. Paul could preach to gentiles. “They desired only that we should remember the poor, the very thing which I was also eager to do,” Paul wrote. (Galatians 2:10)

So helping the poor was central to Christian practice from the beginning. When they seemed to disagree on everything else, the various factions could agree on this.

In Biblical times people had a different understanding of poverty than we have today. Survival was hard. It was assumed that everyone understood hardship and deprivation and had an intimate acquaintance with hunger. Before the age of the self-made man in the mid-1800s, social status was viewed as essentially unchangeable. If you were born a peasant it was unfortunate but not a moral failing. In the mid-1800s, however, society was being transformed. In the UK the aristocracy was beginning to lose its power. In the still largely undeveloped United States, conditions were ideal for poor boys to make good. As P.T. Barnum put it, “In a new country, where we have more land than people, it is not at all difficult for persons in good health to make money.”

Irvin G. Wyllie, in The Self Made Man dates the golden era of the self-made man from 1835. If you wanted to go from rags to riches, this was the year to be born. (It was the year of Andrew Carnegie’s birth.) This generation came up with a new narrative. Horatio Alger wrote about boys who were born to poverty and who improved their lots in life through hard work and moral correctness. It seemed that anyone who was willing to work could become rich, men were in charge of their own destinies and the role of fate in our fortunes began to recede.

In what author Michael B. Katz author of The Undeserving Poor calls the “irony of optimism,”it followed that if a man made his own way, the poor must be to blame for their economic failings.

“The age of the self-made man was also the age of the broken man,” wrote Scott A. Sandage in Born Losers, “This ‘American sense’ looked upon failure as a ‘moral sieve’ that trapped the loafer and passed the true man through. Such ideologies fixed blame squarely on individual faults, not extenuating circumstances.”

The belief that people are entirely in control of their own destinies became so strong that Americans are now blind to the fact that there is a famine in the tale of the Prodigal Son and we tend to interpret it as a cautionary tale about being irresponsible and foolish with money.

In spite of our American industriousness, poverty has persisted. As we increasingly viewed it as a problem of persons (as Katz puts it), we looked for ways to separate the deserving from the undeserving poor in our policies. The identity of the undeserving has shifted over time. In the early days of our nation it was usually an able-bodied man, viewed as drunk and lazy, who was targeted out as undeserving. Increasingly, in our day, it is the unmarried mother.  Katz observes:

Empirical evidence almost always challenges the assumptions underlying the classifications of poor people. Even in the late nineteenth century, countervailing data, not to mention decades of administrative frustration, showed their inadequacy… Still, as even a casual reading of the popular press, occasional attention to political rhetoric, or informal conversations about poverty reveal, empirical evidence has remarkably little effect on what people think. Part of the reason is that conventional classifications of poor people serve such useful purposes. They offer a familiar and easy target for displacing rage, frustration, and fear. They demonstrate the link between virtue and success that legitimates capitalist political economy. And by dividing poor people, they prevent their coalescing into a unified political force. Stigmatized conditions and punitive treatment, moreover, provide powerful incentives to work, whatever the wages and conditions.

This has led to an ironic situation in which we now define those who are more well-off as the deserving poor and those who are the poorest, by virtue of being poor, as the least deserving. The results of a recent study on government spending on social programs to alleviate poverty found that there has been a marked shift away from supporting those earning the least money, as little as 50 percent of the federal poverty line, to those with incomes as much as 200 percent above the poverty line.

We do not suffer with the extremely poor, we blame them. In Mulvaney’s view of compassion, it is we who suffer because the poor need our help.

With finite resources, compassionate people can disagree on how best to help the poor, who needs a helping hand and who does not. The question will always exist. In the past, however, there were certain things we could pretty much all agree upon. We have not had, as Katz wrote, “much sympathy for poor persons throughout American history other than children, widows, and a few others whose lack of responsibility for their condition could not be denied. These were the deserving poor.”

Today it seems even those boundaries have been transcended. People in political power are now arguing that poor children should not be given free lunch because they need to learn responsibility, and that giving meals to elderly widows does nothing to improve the GDP.

So you will forgive me if I look beyond politics and wonder if America is losing its soul.