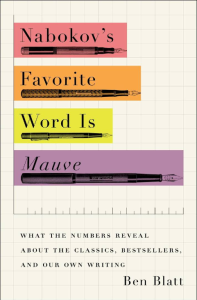 I’ve been reading Nabokov’s Favorite Word is Mauve by Ben Blatt. The book takes a statistician’s view of literature. One of the chapters was on gender difference. There are a number of common words that computer analysis can use to determine whether a text was written by a man or a woman.  For whatever reason (Blatt does not hazard a guess) male writers use “this” more often than female writers, and women use “because” more often than men.

Blatt discovered, not surprisingly, “that in books by female authors, men and women are described at close to equal rates. Yet male authors include women less than half as often as they write about men… Classic literature by men is about men by a quantifiable and overwhelming margin. Classic literature by women is about women more than men, but it’s within a short distance of an even split.”

Blatt went further, examining the words that authors use when describing characters of different genders. An interesting example was the word “scream.”

Male characters do not scream. They shout.

And then there is interrupted.

It’s not the most common word in any writer’s works, but especially in classic literature it is used much more commonly in reference to female characters when the author is male.

I don’t have access to Blatt’s computer programs but I have a couple of phrases I would like to test. The expression “making a pass at” versus “to throw oneself at someone.”

Both expressions connote someone who is making a sexual advance toward someone else. To throw oneself is more degrading than to make a pass, and it carries a greater connotation that the object is not interested– although either a pass or throwing oneself at someone could end with either rejection or sex. If you were to run the numbers, I have a strong suspicion that they would show that “throwing oneself” is something attributed to women and “making a pass” is more often attributed to men. I suspect that an analysis of how these two phrases are used could be quite revealing.