Between classes in Salt Lake City and Denver, Colorado as part of our ballet master class tour, my partner and I decided to take a small side trip through Leadville, Colorado, which looms large in Wilde mythology. In all honesty, I decided to take the small side trip and my partner had little choice as I make the travel plans and do the driving. We did not, however, have the kind of schedule that allowed me to leisurely stroll and imagine the places Wilde must have walked. I did, however, make time to snap a picture outside the Tabor Opera House where Wilde famously lectured. 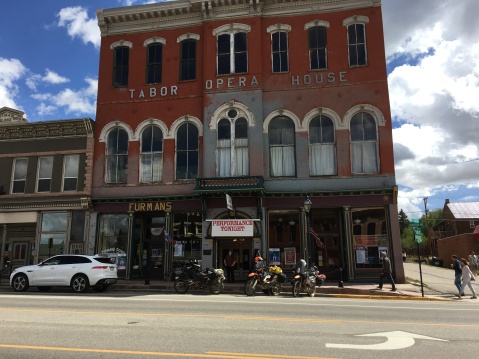 The main drag of Leadville appears not to have changed much since 1882, with the exception of replacing silver mining with tourism as its industry. Even so, I found it hard to call up and image of Oscar Wilde on the street. It is hard to imagine much of anything at 10,000 feet above sea level. My dancer friend seems to suffer more from altitude than I do for whatever reason, and his kindly disguised discomfort was foremost on my mind.

At its peak on the road up the mountain we reached 13,297 feet. You go over this peak and then head down a bit to reach Leadville. This altitude overlooked some sort of ghost town, an industrial building of some sort with abandoned dwellings around it. I assume this was related to mining. We didn’t delve, but wondered at a pair of young bicycle riders who turned wheelies while waiting for their friend. Our bodies felt heavy and we could not imagine biking up the mountain, much less having extra energy to burn off.

The 1997 film Wilde opened not in London but in Leadville. It is always depicted as a rough and tumble working town. The juxtaposition of the famous aesthete with the cowboy movie set sparks the imagination. Leadville historians describe the Tabor Opera House and their town at the height of the silver boom a bit differently.

“By 1879, Leadville boasted the biggest opera house west of the Mississippi, thanks to Horace Tabor’s wealth. The venue attracted national and international performers, actors and orators, along with Leadville’s new rich in attendance. And while there were some “cheap seats” in the upper balcony, most miners and other hard-working types found their musical satisfaction in one of the many dance hall saloons,” wrote Kathy Bedell in Leadville Today.

Or, as Michele Mendelssohn put it in Making Oscar Wilde, “Leadville had a clutch of genteel folk who wanted to show that their town could lay claim to being just as refined and courteous as any other.”

Of course, the courteous and genteel folk do not make for sensational copy, and the papers of the day were more interested in the possibility that Oscar Wilde might be murdered and that he said he’d bought a gun.

I was interested to read in Michele Mendelssohn’s Making Oscar Wilde that the poet suffered from altitude sickness.

Located more than 10,000 feet above sea level, Leadville is the highest city in the United States, and sits at about half the altitude of Mount Kilimanjaro, the highest mountain in Africa.

This is how people like me get their tourist information: biographies of Oscar Wilde.

Standing outside the Tabor Opera House, my partner’s first thought was that it would be hard for an opera singer to sing in this town. (He once had the experience of dancing in Quito, Ecuador, 2 miles above sea level, and having his backstage supplemental oxygen stop working.)

Although we had arrived just in time to make the last Tabor Opera House tour, I knew I could not impose it on my dizzy, tired traveling companion. We went back to the hotel where my partner tried gamely to be a good sport about my bringing him all the way up this mountain to look at an old theater. Although I tried not to show it, he knew I was disappointed in his lack of enthusiasm for Leadville. He offered to stop on the way out of town the next day and snap a couple more pictures before getting the hell out of Dodge. 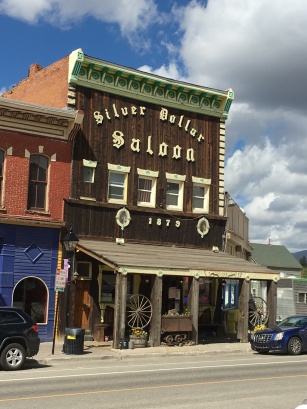 …I started writing this travelogue the day after we descended from Leadville. I think I intended to write something about Wilde’s famous report that he saw a sign in the saloon in Leadville saying “Don’t shoot the pianist. He is doing his best.” It is interesting that in Mendelssohn’s book, the line after the passage on Leadville reads “While in the United States, he had planned to write another book of poems but quickly discovered that his hectic schedule made that impossible.”

I never finished this article. The hectic schedule of touring, and a new city every day, got in the way. It is possible to write on the road. In fact, parts of Oscar’s Ghost were written that way. It is not ideal, and from what I know of Oscar, he was happy to take advantage of any excuse not to write.

I would like to have experienced more of Leadville, and I could have embellished the moment to make it seem more colorful than it was. As it is, I think Leadville could be worth visiting, if you have a bit of time to enjoy it, and you’re not too prone to altitude sickness.