Last night I dreamed I was in a theater and the ballet dancer David Hallberg was on stage, dressed in a white ballet costume. He was breathing in that heavy but controlled way that dancers do when they are taking bows after a solo. (What that? It was no effort at all. You see, I’m not even winded.) He was explaining to the audience, who I understood to be a room full of theater owners, why they should book his Nutcracker.

“Unlike other Nutcrackers,” he said. “This one will finish in the Museum of National Security.”

I drifted to consciousness at this point, which is why I remember, but soon fell asleep again and the dream theme continued. I was scrolling through an Amazon listing for the book version of the National Security Nutcracker starring David Hallberg. A voice over my shoulder was asking me (as people used to when I worked at Borders Books and Music) whether the Nutcracker had been released as a book with a blue cover. I explained that, no, it was small and green.

A review in one of those Amazon pull quotes jumped out at me. “The longer you sit with this book after reading, the more meaning you will find.”

The quote was signed “Bette Midler.”

Now this is a Nutcracker production I have to see.

I think this dream rivals the one in which I was on the set of Downton Abbey with Stephen Fry.  Or the one I had the other night (which I did not blog about) in which I was watching a Youtube video interview with Lord Alfred Douglas. (In my dream world there are such things.) The interviewer was saying, “I’m surprised you read____”  The name was of something folksy and lowbrow which I no longer remember.  Douglas replied in his plummy accent, “It is country but it is charming.” Then his smile faded and he turned on the interviewer shouting, “You presume to tell me what I should read!”

Before bed yesterday I listened to this interview with Hallberg about the Bolsohi Ballet’s Nutcracker, which will be aired as part of the Ballet in Cinema program on December 21. It is probably what put him and The Nutcracker into my subconscious.

I have something of a Nutcracker conflict this year. As I mentioned, The Bolshoi’s Nutcracker is airing in cinemas on December 21.  Bolshoi Ballet in the U.S. Facebook page is showing images of Evgenia Obratsova and Vlad Lantratov to advertise the produ 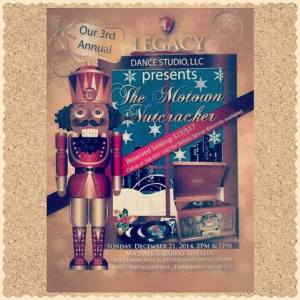 ction, but the Bolshoi’s web page lists Anna Nikulina and Denis Rodkin in the principal roles on that date.

If you are in the Detroit area, however, you have an opportunity on the same day to see The Motown Nutcracker at the Ford Performing Art Center. My partner, Valery Lantratov (also known as Vlad’s dad) choreographed the pas de deux for this year’s production. When Legacy Dance Studio first asked him to create a classical pas de deux for the Nutcracker to Motown music, it was a bit outside his comfort zone.  But I had an opportunity to see the result this summer as he was rehearsing with the students, and it was beautiful, proving my theory about creativity from constraints.

I am looking forward to seeing it.

My subconscious was having a British pop culture night recently.  I dreamed I was on the set of Downton Abbey. I had an acting role, it seems–the character of a person who had died and come back as a ghost.  I was chatting with Stephen Fry about my recent ballet tour.

It was because Stephen Fry showed up in my dream that I decided to look up his web page and I discovered his open and honest post about his attempted suicide and struggles with bipolar disorder.

There was a line in his post that I related very much to.  (The version of this sentence for grammatical purists: “to which I very much related.”)  The grounding power of having a book to write:

“In the end loneliness is the most terrible and contradictory of my problems. I hate having only myself to come home to. If I have a book to write, it’s fine. I’m up so early in the morning that even I pop out for an early supper I am happy to go straight to bed, eager to be up and writing at dawn the next day. But otherwise…”

I write, not because I like the way it sounds when I say “I am a writer” or because I dream of writing a best seller that is made into a movie and getting an Oscar for best screenplay adapted from my novel (although, I must admit I have these fantasies).  I write simply because the idea of not writing makes me go off the rails a bit.   The process of writing, the focus, the flow keeps me centered.  When I am working on a book (or play, or article or speech) and I have that momentum, I feel as though I am in harmony with the world, not fighting against it.   It is not a thought that comes up in this way, because all I am thinking about is the work, but when I am writing I have a sense of purpose, a sense that I am doing what I am supposed to be doing.

There is an expression that I took away from a book called The Van Gogh Blues by Eric Maisel.  The author described the depression that artists often experience as “a crisis of meaning.”  Artists, Maisel posits, suffer from “being dropped, willy-nilly, into a world not of their making, which they are forced to make mean something.”

When I am in the process of writing, I never have a meaning crisis.  When I step out and enter the world of selling and marketing the finished literary work I am constantly confronted with crises of meaning.  If you follow my blog, you may have noticed a theme of frustration with the business of publishing and a lot of musing on failure. Writers are always failing, I wrote.  (See also “You Weren’t Expecting to Be Paid, Were you?” and “How Writing is Like Working at McDonalds.” and my series on the near impossibility of selling an indie or small press book, my post on post-publication depression, my post on the frustration of having your book stamped with an inappropriate genre label,   and  But What if My Ship Doesn’t Come In? in which I discuss the taboo of failure in America. So, yeah, I’ve written about my frustrations quite a bit.)

There is no easy route to publishing.  Go to any forum for independent authors and you will find their list of grievances against traditional publishers: they don’t support authors enough, they want to make changes that detract from the work, they are risk averse and focused on the bottom line. What is more, it is hard to get your work accepted by them.  Indie forums sometimes sound a lot like high school, where you complain about the popular kids and how superficial and mean they are and how they won’t let you into their club.  But the biggies don’t corner the market on badness.

I stumbled across an article on “The Plague of Independent Publishers” today (while looking for a small publisher for a new novel.)  It does a good job laying out the downsides of going with a smaller publisher.  A small indie publisher can be the best of both worlds– lots of personal attention, lots of freedom but not having to go it alone, or it can combine the inattentiveness of a large publisher with the lack of distribution and marketing of self-publishing.

Finally, self-publishing, which is a huge amount of work and generally does not yield the kinds of results most authors dream of.  One of the things that is not often said about self-publishing is that it can be expensive.  The cheapest professional editing is likely to cost around $2,000 and that is before you get into cover design and layout. If you are a starving artist, self-publishing actually has a very high barrier to entry if you want to do it to a professional level.  (And if you don’t, what’s the point?)  The financial burden can make it harder to break into for some people than traditional publishing.

None of these struggles are anything new.  Writers have always faced these kinds of issues when they looked away from the page.  There is no method of publishing that makes a writing career easy, and there has never been one.   Moving out of the state of flow of the writing process and into the harsh world of trying to find readers can seem like running full speed into a brick wall.

Now, I don’t write posts about the challenges of being a writer in order to whine and whinge.  I don’t explore these topics for sympathy and attention.  (One of the most interesting criticisms I read of Stephen Fry’s admission that he had attempted suicide was that it was a plea for attention.  I don’t know much about his life, but attention does not strike me as something Stephen Fry lacks.   Follow the link above to his article about the experience.  I think a lot of people will relate to what he has to say about feeling lonely and yet wanting to be left alone, whether they suffer from clinical depression or not.)  I do not even write about the pitfalls of publishing for that old TV talk show standby reason: so that others will hear my story and feel that they are not alone.

Rather I write because writing is how I find meaning and I am trying to force the challenge itself to mean something.

So what does it mean?

I don’t know yet.