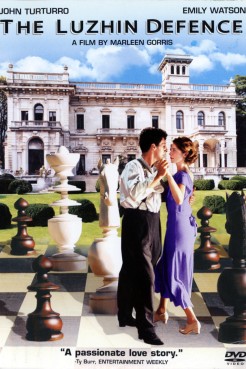 Last night I watched the film The Luzhin Defence, an older title, which I got from the library. The film is based on the novel by Nabokov, which I have not read.

After watching the film, I developed an entire literary theory, which I subsequently discovered is utter nonsense, but it is so satisfying I feel I must share it anyway.

The ending of the film reminded me of something my Russian partner once told me.

We were talking about the “American story.” The hero wins against overwhelming odds and there is a happy ending. Good triumphs over evil and we can feel safe and secure knowing Truth, Justice and the American Way are safe. Americans are comfortable with the happy ending even if it’s an illusion. We agree to this conceit the way a ballet audience agrees that it is normal for women to wear tutus and walk on tip toe. It is a narrative convention.

So I asked my partner what the Russian Story was. His answer blew my mind. In the classic Russian tale, he said, boy meets girl. Boy dies. Boy comes back as a ghost. They live (or is it die?) happily ever after and there is a lesson- a moral.

Russian heroes, according to my are destroyed before they even have a chance to begin. Then the hero is reborn to the circumstances, he is victorious in failure and he brings his lesson back to the world. The American story does not teach us what to do with failure. It simply does not give us the option. Villains fail. Heroes succeed.

Now, my partner is a ballet dancer, not a writer. He has not made a study of Russian literature, and I don’t know if his off-the-cuff description of the “Russian story” is accurate or not. It was, in any case, thought-provoking.

When I saw The Luzhin Defence I felt I had confirmation. Spoiler alert: I will now talk about the end of the film.  The Luzhin Defence is the story of a man being driven mad by his obsession with chess. He only knows how to view the world as a chess game. The film focuses on Luzhin’s relationship with a woman named Natalya, who becomes his fiancee. In the film, Luzhin (brilliantly played by John Tuturro) has been sabotaged, and suffers a nervous break-down during a pause in the final game of the world championship. Told that chess is driving him mad, he must choose between a “normal” life with his fiancee but without chess, or chess and madness. He jumps to his death. In the final scene, the grieving Natalya finds Luzhin’s written plans to complete the chess game. Luzhin’s opponent agrees to let her play the game out using his strategy, and it wins.

Remembering what my partner once said, I concluded that Russian drama is not about what one achieves in his lifetime, but about his legacy. It is not the happy end, the tragic end, or the noble end. It is about the after-effects of a life.

Here’s the problem: The epilogue was not in the novel. From a review in The Guardian:

What was a beautifully structured narrative of mental drama becomes a rather over-familiar costume romance, pillowed by a swooningly sentimental epilogue that has nothing to do with Nabokov’s novel.

So it turns out it is just another example of a film maker adding a happy end (of sorts) to a novel that is felt to be too unsatisfying for the screen.

Steven Poole, in his review sheds some light on the problem film makers often face when translating a novel to film.

A clue is to be found in Nabokov’s 1943 short story, The Assistant Producer, in which the narrator draws a lugubrious parallel between cinema and life, both of which mock the unwary with fatal coincidence. “Indeterminism is banned from the studio,” he writes. That is precisely it: the cinema simply cannot maintain creative ambiguity. How do you preserve the master’s playful indeterminism when a movie must show one thing or the other?

So there is a perfectly good literary theory all shot to hell. This all made me think of Oscar Wilde’s story The Portrait of W.H. in which he has his character put forward a theory that the W.H. of Shakespeare’s sonnets was a boy actor in his company. After the character explains all the clues that point to his conclusion (and gets someone else excited about it) he abandons his theory because it pre-supposes the very thing he is trying to prove– the existence of the boy actor W.H.

You can imagine Wilde himself becoming excited about the idea of W.H., building a grand narrative about it, only to make the realization that his reasoning is circular. So he shifts his focus and makes his story not simply about W.H., but about the beauty of believing a beautiful story, rather than the factual underpinnings of the story itself. (Lord Alfred Douglas, always a black and white thinker, in his later years set out to prove W.H. did exist using church records.)

In the spirit of Wilde, I’m not going to abandon my beautiful theory just because it happens not to be true. Clearly the end of the film has nothing to do with Russian story-telling. But for a moment, when I believed it did, I glimpsed something– another option for viewing narrative.

What if our stories were more concerned with legacy than with success in the here and now? Would we live our lives differently?

I got it in my head recently that I wanted to read a book from every country progressing in alphabetical order.

It remains to be seen if this is something on which I actually follow through. In any case, Afghanistan is the first country in the alphabet and I settled upon The Gifts of the State and Other Stories edited by Adam Klein.

It is a short story collection culled from a series of writing workshops Klein gave in Kabul. The stories were written by “young people.” I was not sure whether this meant teenagers or people in their 20s. The first essay in the book defines “young” as under 30. Some of the stories struck me as being the work of teenagers and some of polished adults. For most of the authors English was a second or third language so this may account for some of the variation in the quality and impact of the stories.

The stories provide a fascinating glimpse into a world where history is constantly intervening in life, where nothing is certain and every day life goes in the pauses between crises. The stories that I found most memorable were The Hasher by Abdul Shakoor Jawad, which is a wistful but matter-of-fact tale of the day a village tradition was lost, Ice Cream by Hosai Wardak which describes the reactions elicited by a woman in more Western-style attire, The Sea Floor by Khalid Ahmad Atif, a harrowing story of violence told from the perspective of a translator working for a U.S. military unit, and Exiles in the Land of Faith by Hamid Azizi which describes a university student’s inner conflict and guilt when the community turns against his half-Jewish roommate and then there is Hardboiled by Ali Shah Hasanzada a murder plot hatched by a man who sells illicit Western books and who fancies himself a character out of a Mickey Spillane novel.

In the United States, we tend to compare our current lives to an ideal and to focus on closing the gap between our current situation and our dream of how great life could be. We believe in self-improvement, growth and progress with an almost religious faith.  We expect life to be predictable and that we can, through our own efforts, bend the future to our will.

Klein describes his student writers as living in “a country measuring out what to forget and what must not be forgotten… The students have exile minds— by which I mean that they can’t conceive of a world where destiny won’t encroach.”

If a U.S. writer were to describe some of the tragedies that appear as the background of these stories, there would likely be a different tone, and underlying sense that this is an aberration and not how life is supposed to work. For the most part, the Afghan stories are not looking for someone to blame for misfortune. The various invading forces and factions, the Russians, the Taliban, the Americans, are described almost like natural disasters– storms of history that blow through and interrupt the normal course of life, leaving the people who remain to clean up in their wake and to try to figure out which way the wind is now blowing.